Halfway up Mt. Otowa, one of the peaks in Kyoto’s Higashiyama mountain range,
stands Kiyomizu-dera Temple, which is abundantly blessed with nature. It provides landscapes to match each season,
including cherry blossoms in spring, lush green in summer, colored leaves in autumn, and snowscapes in winter.
The mountains, which surround the temple buildings, reveal many different views from dawn till dusk and create a stunning landscape
in harmony with the beautiful scenery of the ancient city. As the pure water constantly wells up,
the scenery also changes its appearance every moment. Through the regular Buddhist events and special viewings,
visitors can feel Kannon’s compassion and acquire an even better understanding of the deity. 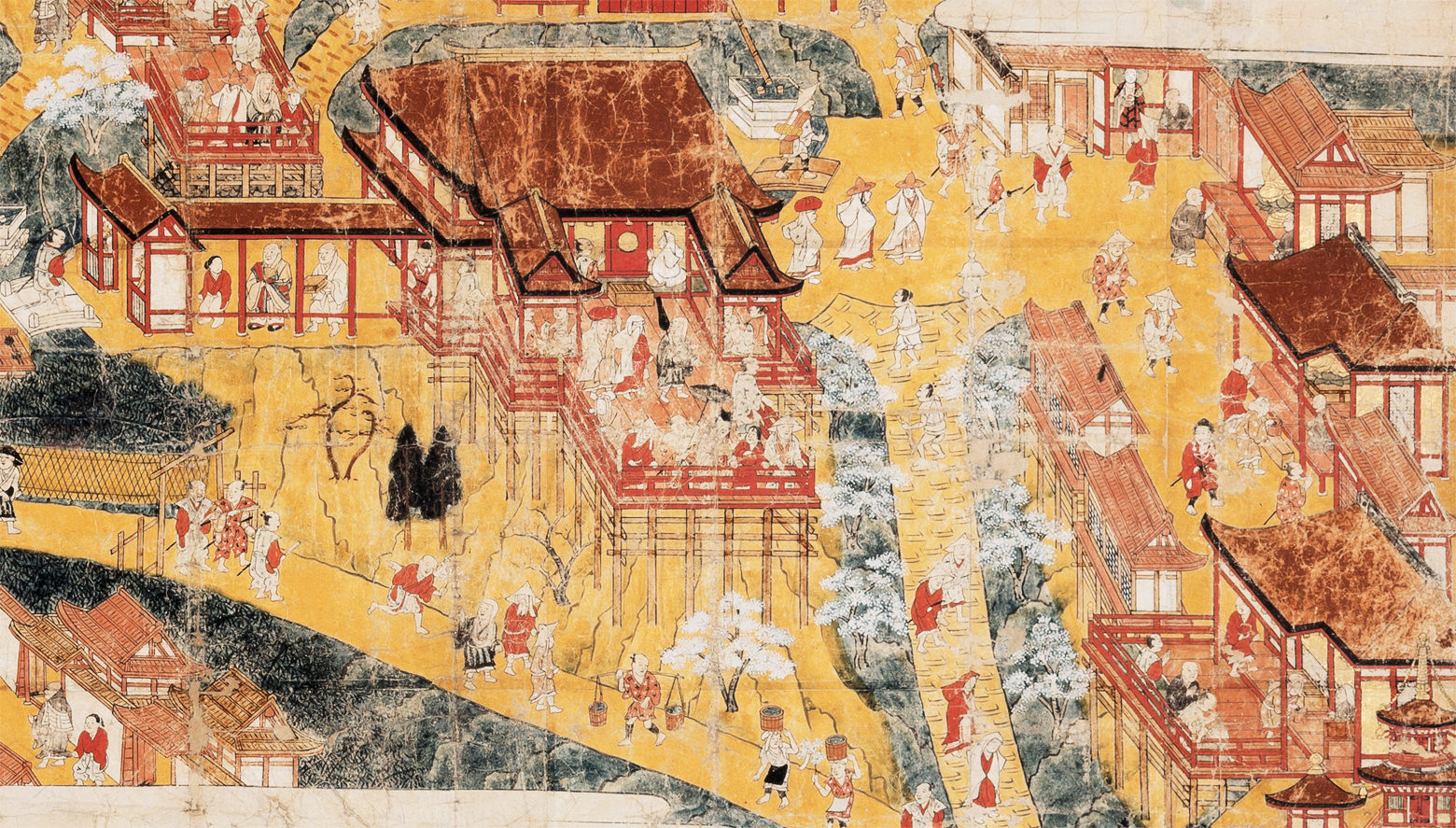 THE HISTORY OF KIYOMIZU-DERA TEMPLE

THE HISTORY OF
KIYOMIZU-DERA TEMPLE

Otowa-san Kiyomizu-dera Temple was founded in 778. Its history dates back over 1200 years. As a holy place where the deity Kannon’s great compassion prevails, the temple has long been open to citizens of all classes. History books and literature describe how large numbers of people have enjoyed visiting Kiyomizu-dera Temple throughout its history.
Among the grounds, which spread over 130,000 square meters along the mid-slope of Mt. Otowa in the eastern part of Kyoto, stand thirty Buddhist buildings, including the national treasure Main Hall and many other important cultural properties. Since its foundation, most of the buildings have been destroyed by fire over ten times. Thanks to the assistance of the temple’s faithful, they were rebuilt time and time again. Most of the present buildings were reconstructed in 1633. In 1944, Kiyomizu-dera Temple was registered on the UNESCO World Cultural Heritage List as one of the Historic Monuments of Ancient Kyoto.

KANNON REIJO: WHY THIS TEMPLE IS SACRED

KANNON REIJO:
WHY THIS TEMPLE IS SACRED

According to the book, The Origin of Kiyomizu-dera Temple, an old man in white appeared in a dream to Kenshin*, a monk who had led an ascetic life in Nara, and gave him this revelation: “Go north and find a crystal spring.” Inspired by this vision, Kenshin walked north and discovered a pure, gushing waterfall in Mt. Otowa, Kyoto. He also met the priest Gyoei-koji, an old hermit who built himself a hermitage and practiced asceticism near the waterfall. Gyoei-koji granted Kenshin a sacred tree infused with the power of Kannon. “I’ve been waiting for you. Please carve this tree into a statue of the thousand-armed Kannon to guard this sacred place of Kannon.” Gyoei-koji left Kenshin with these words and disappeared. Kenshin realized that Gyoei-koji was an incarnation of Kannon. Later Kenshin kept watch over Gyoei-koji’s hut and maintained the peace and security of the entire sacred area. The crystal spring that Kenshin discovered was later called Otowa Waterfall, from which pure water continues to flow even today.

Two years later, at Otowa Waterfall Kenshin came across a warrior called Sakanoue-no-Tamuramaro who had come to Mt. Otowa to hunt deer. Kenshin admonished Tamuramaro for taking life on the holy grounds of Kannon and preached to him about Kannon’s virtuous deeds. Tamuramaro was deeply moved by Kenshin’s teachings. Some time later, Tamuramaro built a temple to enshrine the Eleven-headed Thousand-armed Kannon Bodhisattva as the main object of worship and named it Kiyomizu, meaning “pure water,” after the clarity of the waterfall.* Kenshin practiced mountain Buddhism at Kojima-dera Temple in Nara, in which Kannon Bodhisattva is enshrined. He later changed his name to Enchin. 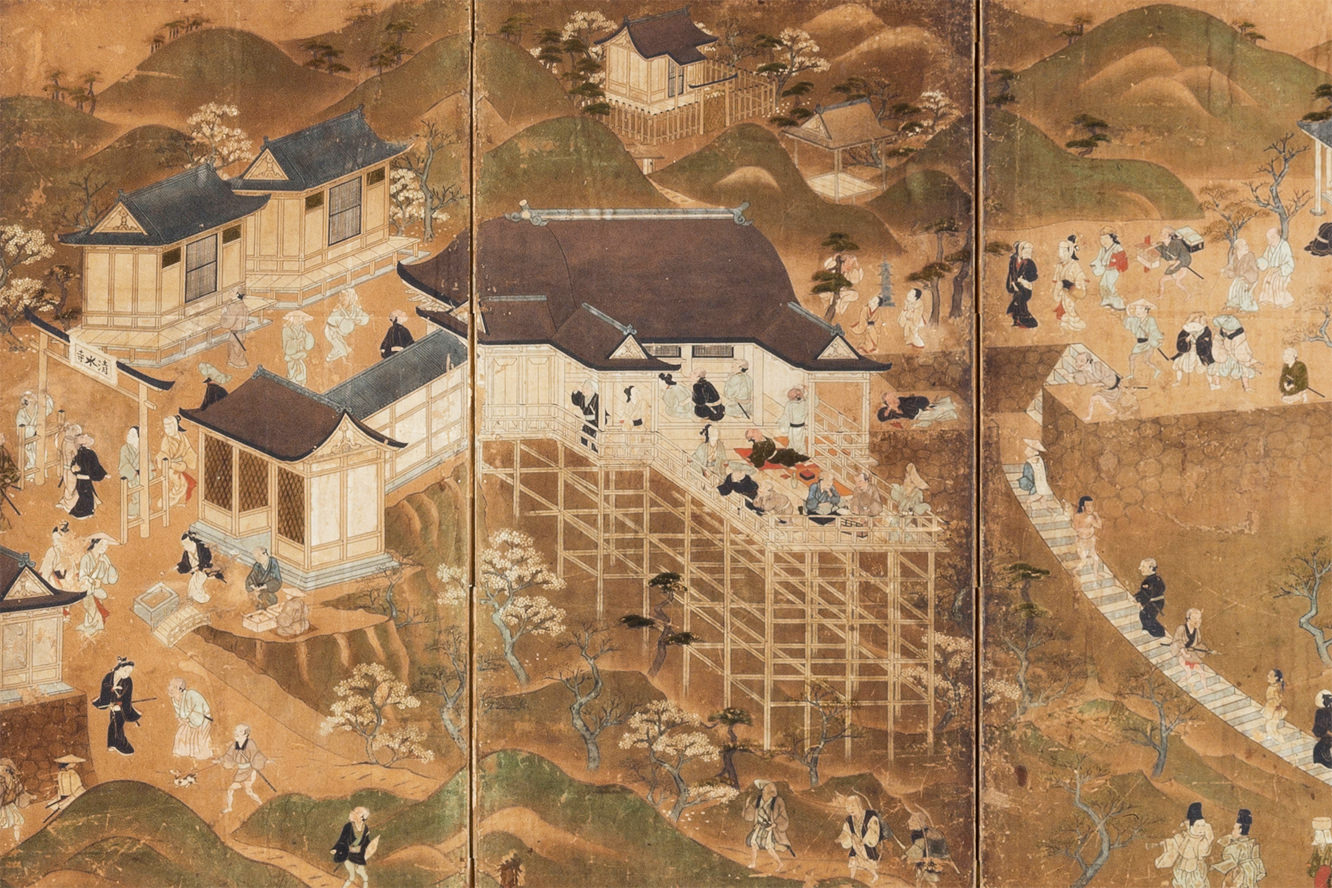 Folding Screen with the Painting of Amusements in Kiyomizu (17th century) 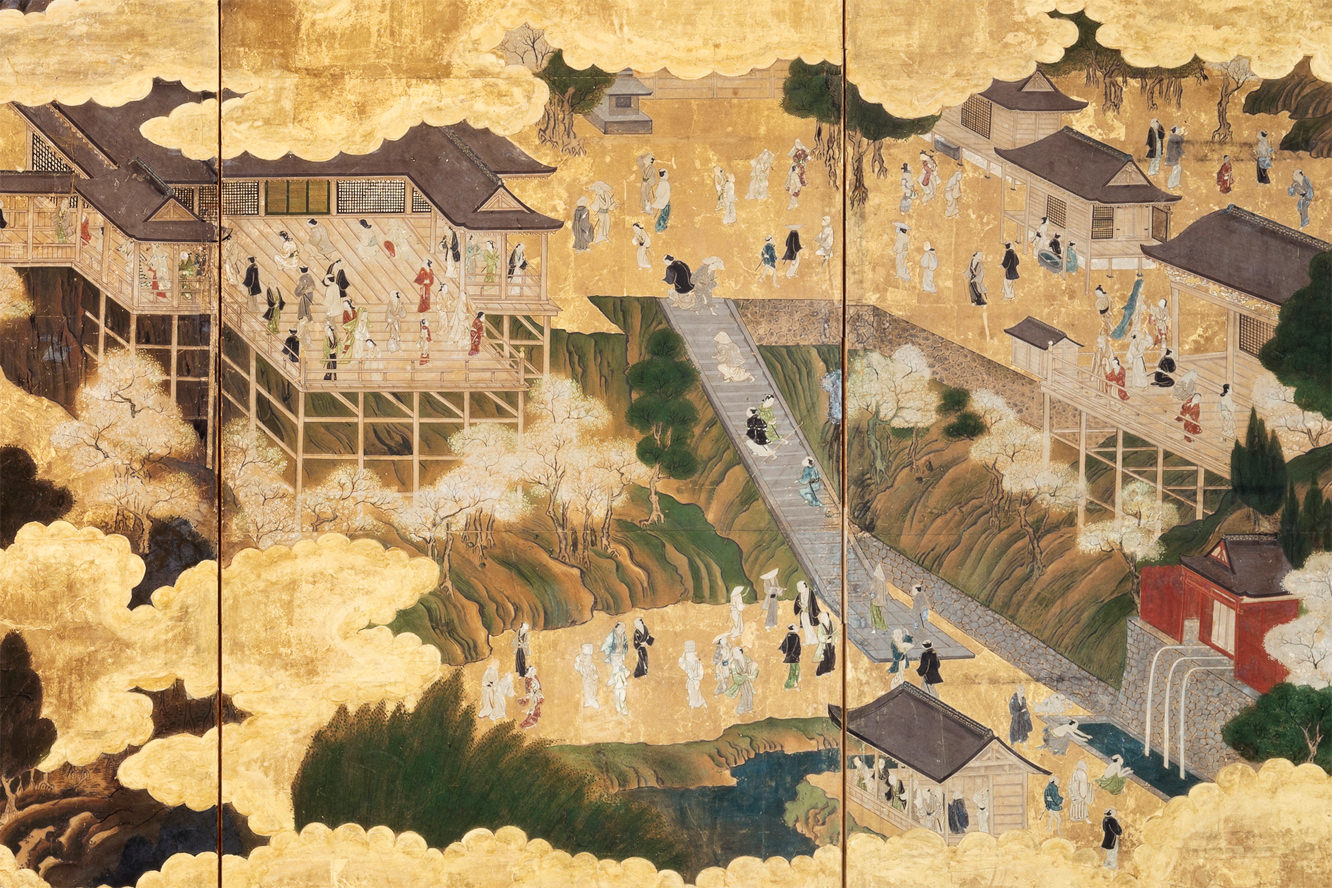 THE KITA-HOSSO SECT: FOUNDED WITH THE GOAL OF
“BUDDHISM THAT SOCIETY NEEDS”

THE KITA-HOSSO SECT:
FOUNDED WITH THE GOAL OF
“BUDDHISM THAT SOCIETY NEEDS”

THE HINOKI WOODEN STAGE OF KIYOMIZU

THE HINOKI WOODEN STAGE
OF KIYOMIZU 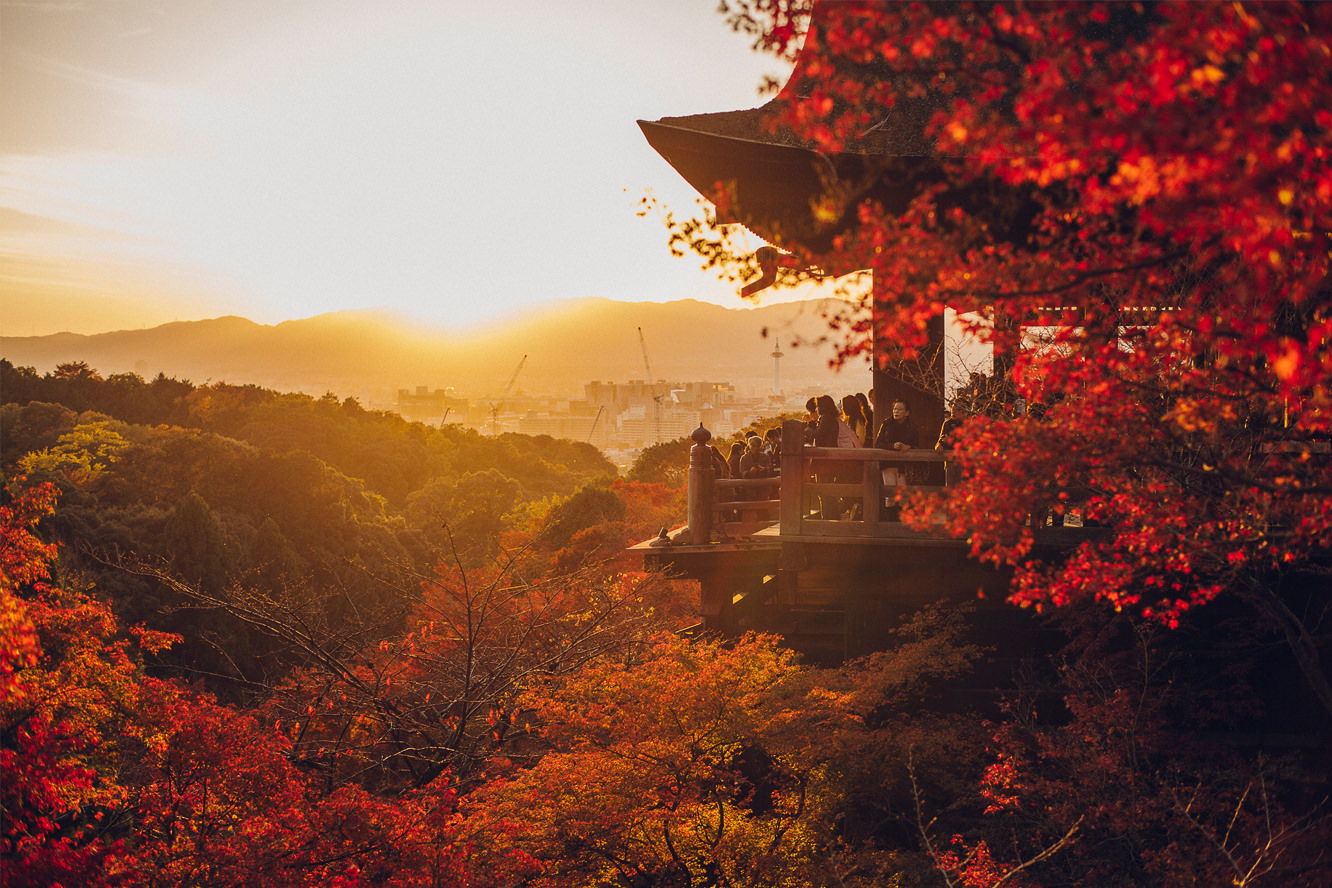 The broad Kiyomizu Stage, which hangs over the front of the Main Hall, is the most renowned of all the structures in Kiyomizu. The spacious floor is approximately 190 square meters in area and is covered with over 410 hinoki (Japanese cypress) boards. Its structure is supported by over 13 meter-high pillars from its foundation. The stage offers a stunning view of the whole city of Kyoto, whose beauty has long captivated many visitors.
“Standing on a hinoki stage” is the Japanese expression for “stepping into the limelight.” Although it is uncertain if the expression comes from the hinoki stage in Kiyomizu, the stage is used to dedicate performances to the Kannon on the occasions of Buddhist religious services. 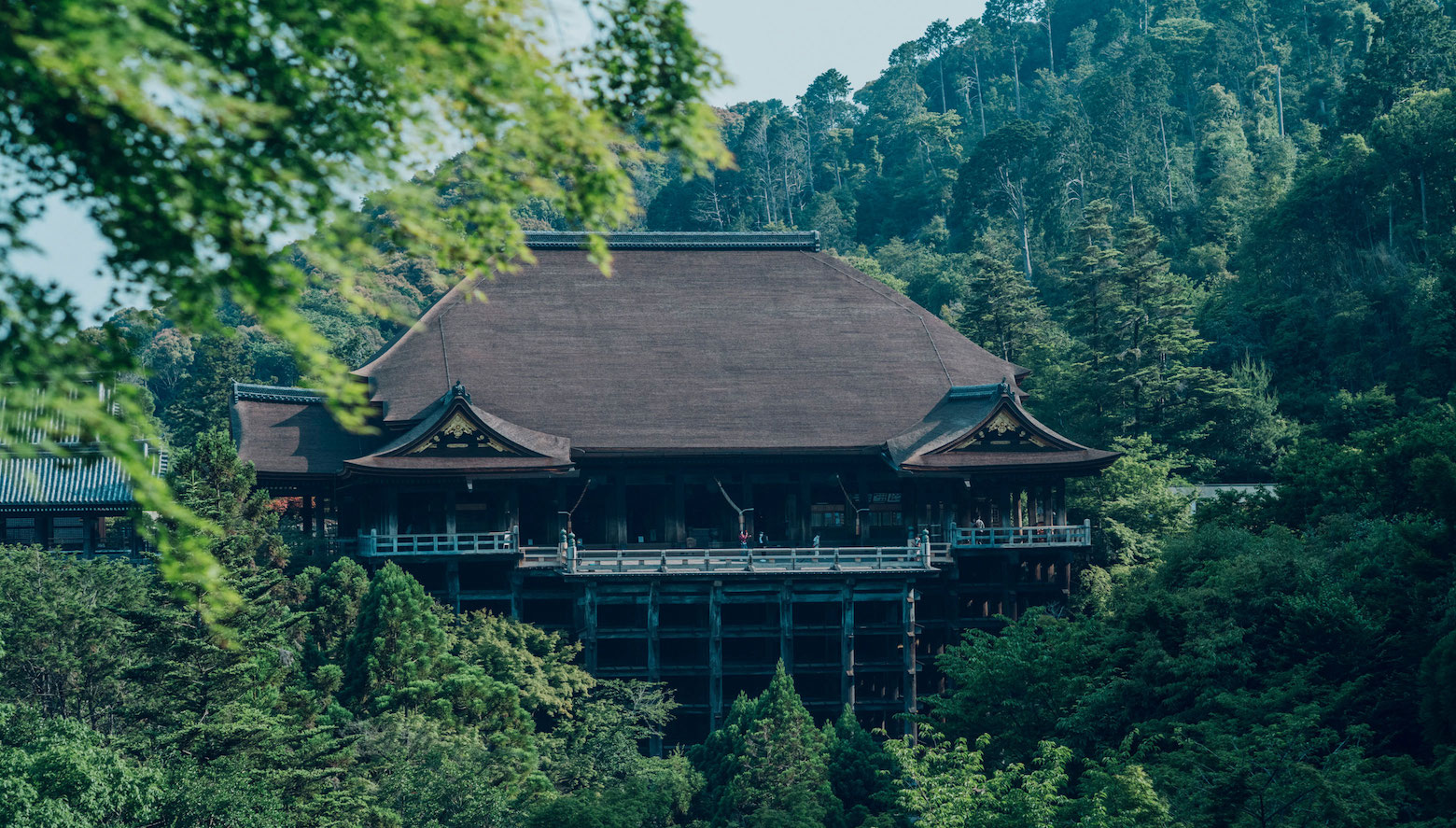 The Main Hall was built on a steep cliff using a traditional Japanese method of construction. The assembled pillars and rails work like a scaffolding and support the structure so firmly that it is highly earthquake-resistant even on its steep slope. Overhanging the hall is an imposing veranda, called Kiyomizu Stage. Its stands nearly 13 meters high, almost equal to a four-story building. The stage is supported by 18 pillars made from over 400-year-old zelkova trees, the largest of which is over 12 meters high and two meters in girth. These pillars are combined with a number of rails, which penetrate through each pillar and form joints to strengthen the overall structure without using a single nail. The present stage was reconstructed in 1633. Withstanding hundreds of disasters over the years, this traditional wooden structure continues to support the stage, which is always bustling with visitors. 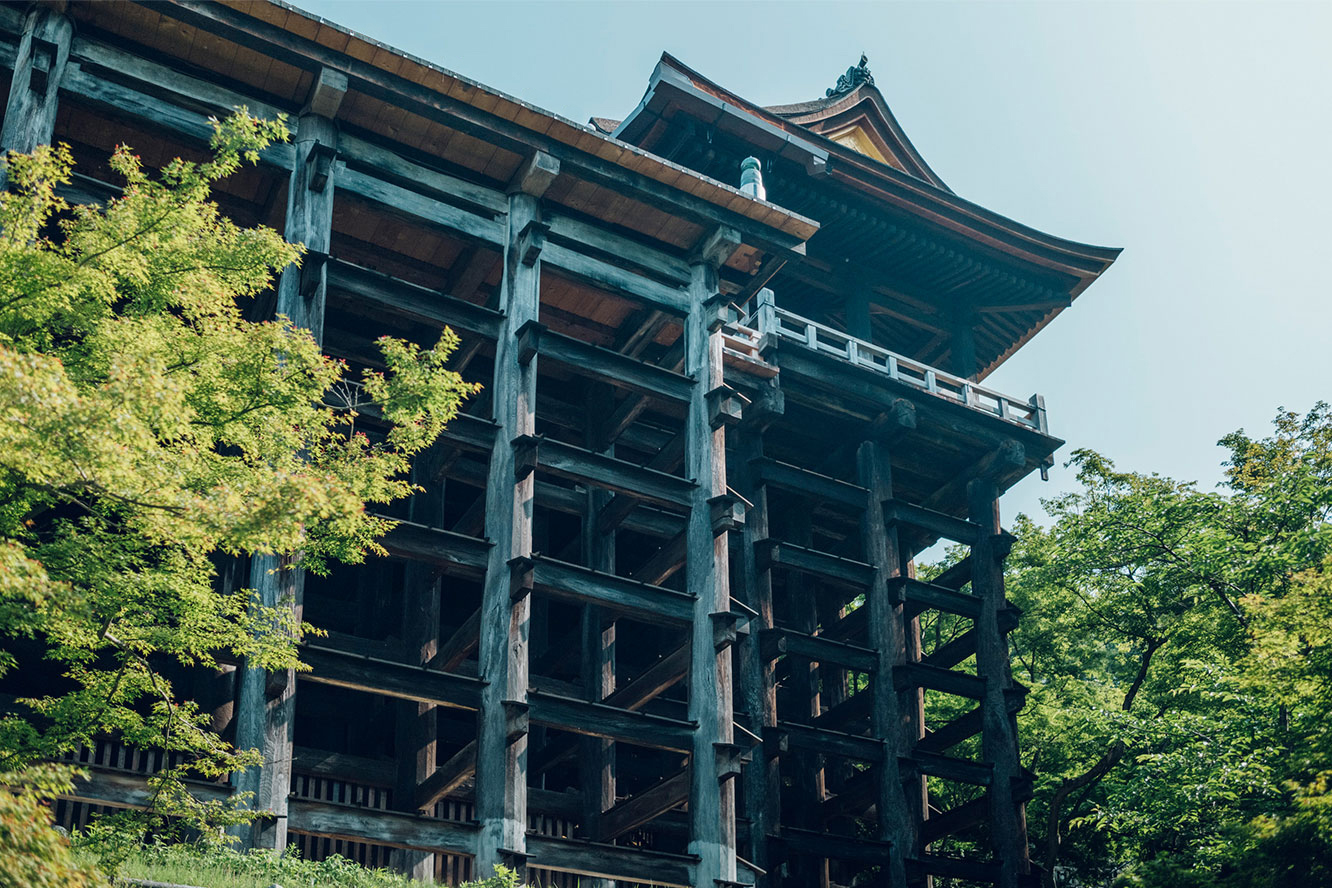 The origin of a famous Japanese saying

The origin of a
famous Japanese saying

There is a popular Japanese saying, “to jump off the stage of Kiyomizu.” It means to make a decision and “take a plunge,” as if jumping off the stage overhanging the Main Hall which was built on the high, steep slope. This saying implies that the Kiyomizu Stage has long been recognized as being representative of multistory construction throughout the country. The temple has been popular and so faithfully worshipped by the folks as a holy place of Kannon that the stage continues to be a well-known attraction. 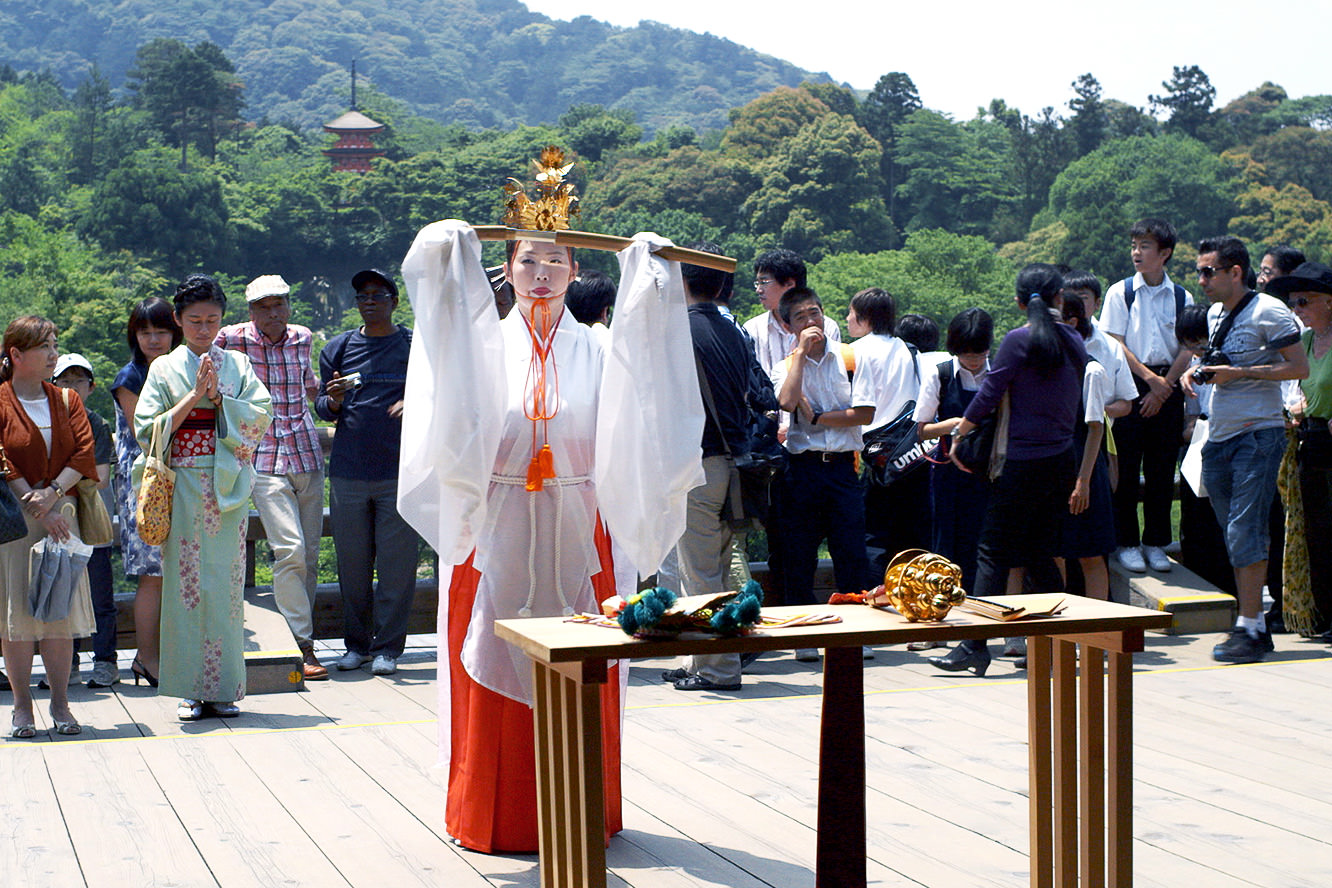 This stage was originally designed as a setting for a variety of traditional performing arts dedicated to the Kannon, the principal image of Kiyomizu-dera Temple. From old times, ceremonial court music, Noh plays, Kyogen comedies, Kabuki performances, and other performing arts have been offered on this stage. Though it is famous for its outstanding view, the stage is intended as a place to worship the Kannon enshrined in the nainaijin (the innermost sanctuary) in the Main Hall, with one’s back to the landscape. Performances are dedicated here on special religious occasions even today.

THE ARCHITECTURE OF THE MAIN HALL

THE ARCHITECTURE OF
THE MAIN HALL 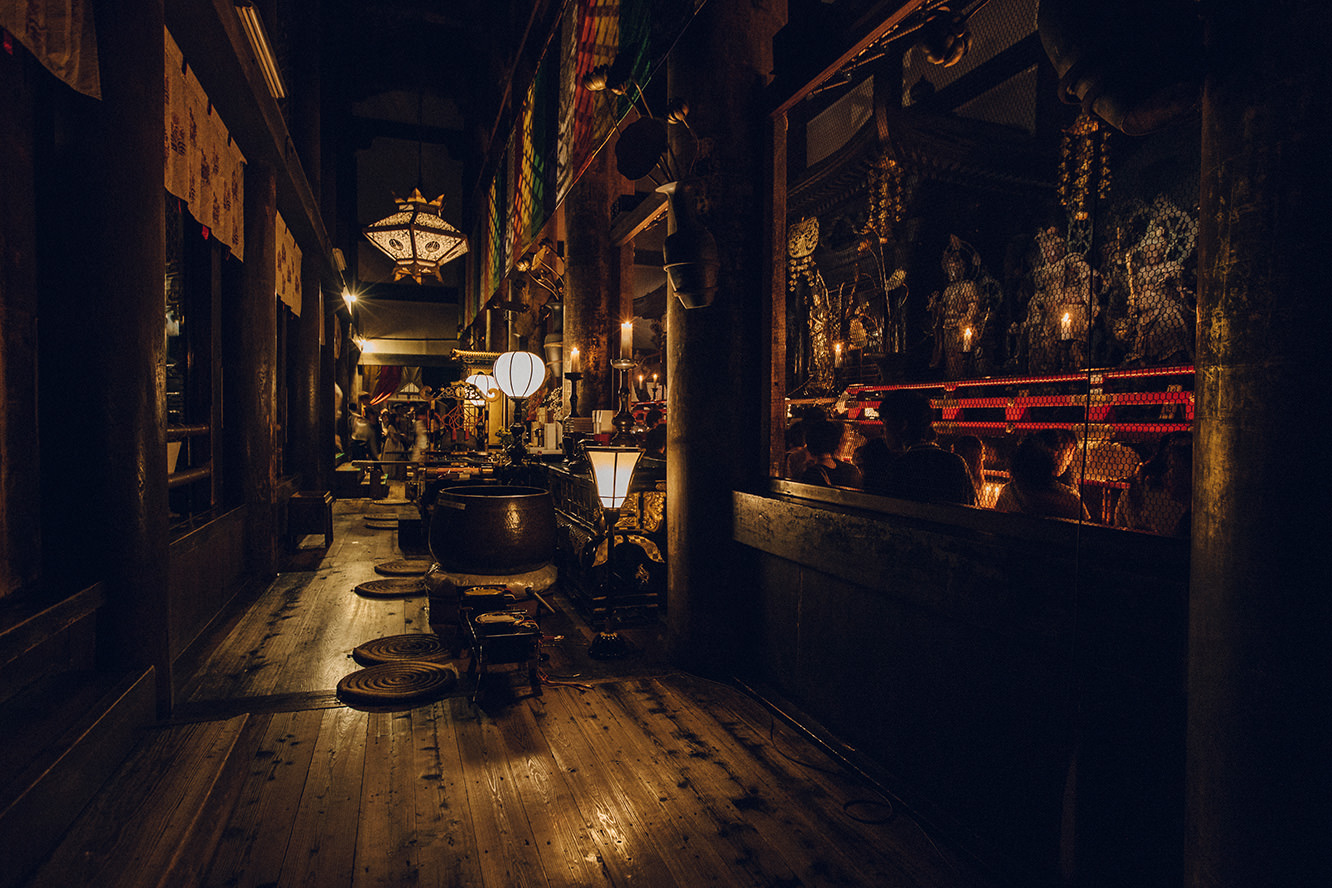 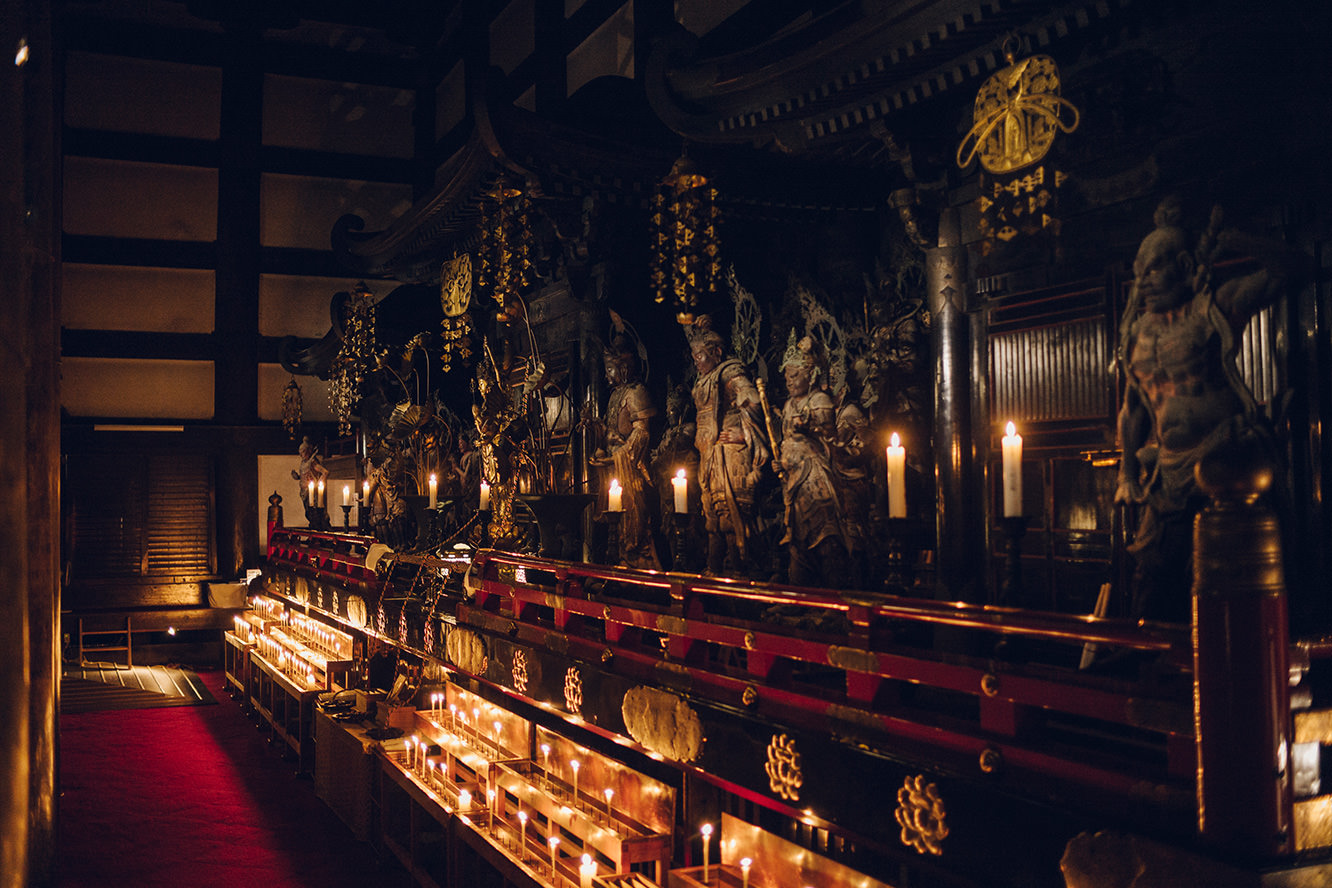 Although naijin and nainaijin are usually closed to the public, visitors are allowed to enter nainaijin on special occasions such as the Thousand-day Pilgrimage and make a prayer in the presence of the statue of Kannon.

THE TEMPLE OFFERS A STUNNING CITYSCAPE OF KYOTO

View this page to learn about how to get here. Various means of transportation from Kyoto Station and many other stations are described.

THE TEMPLE AND A STUNNING CITYSCAPE